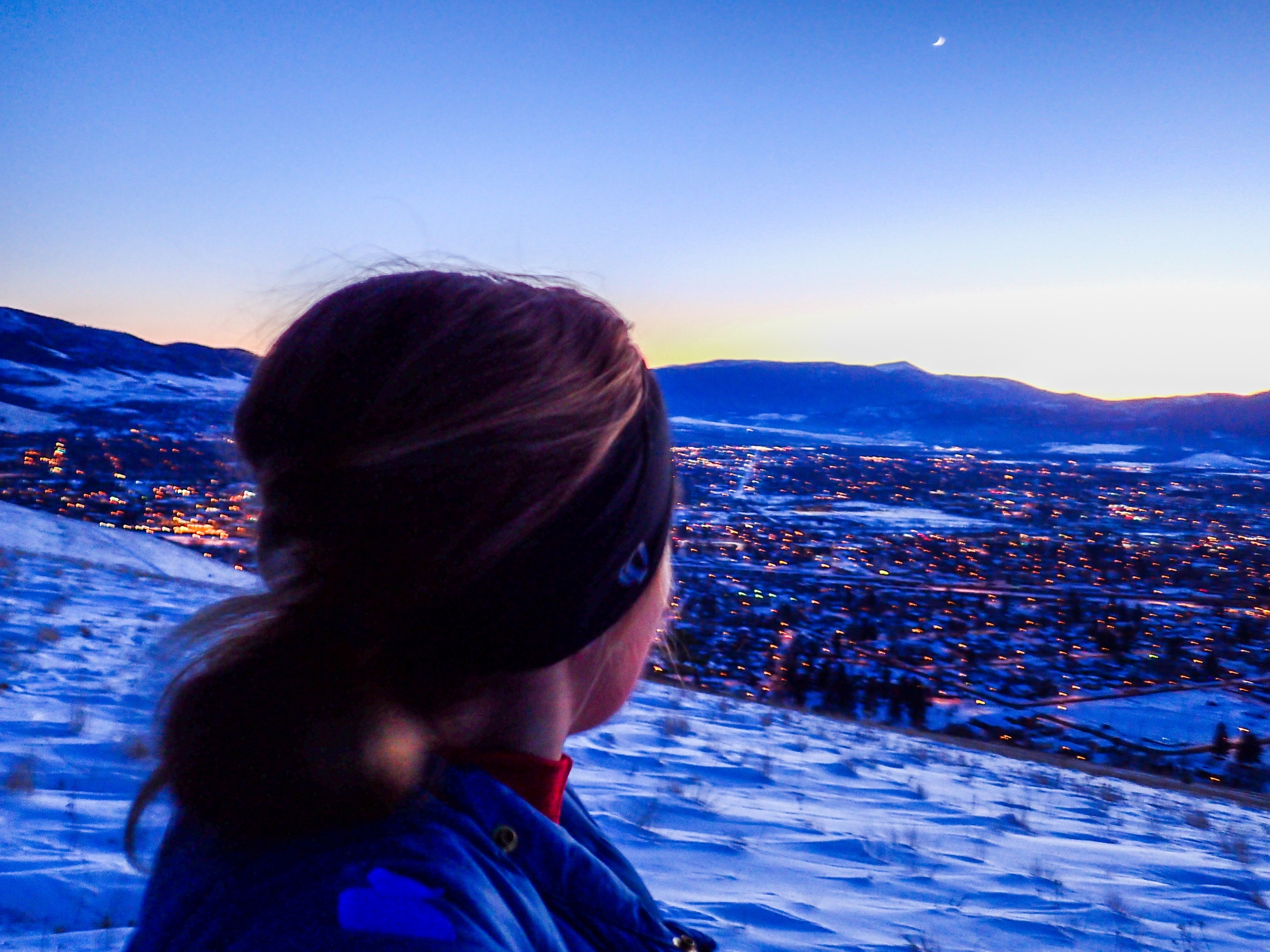 I walked out of work into the waning hours of 2016. It felt funny to be on the same doorstep 365 days later. Joy – not regret over the past or excitement for the future – filled me as I pushed my furry pup out the door to watch the sun leave us. The moment thrummed through me as I danced and sang like a mad woman to the music pouring out of my car.

We reached the trailhead in the middle of this valley we call home in the far North. As I crunched through the snow, the feeling growing in me was nameless, but I felt like I could fly.

Moments and memories gathered like feathers to my bones. My arms flickered with color of the past year’s shards. Heart break and losses painted some black. Others burned with the amber of the sunsets and sunrises I danced through in nights turned to mornings. The swirling rivers of my summer colored some deep blue. Others shown deep purple with flecks of silver for the nights I spent under the moon and stars. The pigments of my past year gathered in a rainbow to the fragile quills. The wings unfurled onto my back as the story I had wrote unfolded into the valley below.

I climbed an island of hills in the fading light. As the valley grew further away, a smile attached itself to my face. As I passed people, I wondered if they knew the secret: we had made it. No matter how tattered and broken the past year left us, we were standing at the door of a new one.

The sun painted the mountains that ringed the valley like a queen’s crown. I sat in the middle of it as the peaks turned gold. Big indigo swatches stamped themselves like giant’s footsteps across snowy hills.  The light turned that snow into shimmering lavender silks of a lady’s gown. I walked the ridge as night grabbed the left side of me and the sun clawed into the sky, shredding it red, on the other. I tottered between time. The past brushing my skin as it left.

The beauty overwhelmed me, too unbearable for a mere human to bear witness to. It spilled into me and out as tears rolled down my face. I beat my feet into the snow and twirled as darkness came. The city shown like a midnight opal flecked with flame. I watched the year slowly seep away into the orange sky. My pup flew through the snow barking. We celebrated nothing and yet everything.

Regret and resolutions consume people, but we are here … we made it through the guillotine of the last year. Believe that we have everything we need within us to fight the coming injustice and carry all the pain but to also live with intolerable wildness. No one can guarantee a safe exit so let us burn again. Burn so brightly no one can say we were not alive, that we did not fight, that we did not care. The beauty remains for those willing to look. Like a phoenix swirling out of the fire, we will be born again of the rubble and flames of last year.

The woman twirled with her wings shimmering in the wind as a furry black dot ran circles around her. She lifted above into the night leaving a trail of light behind her. She wore her past proudly on her bones, for the good and the bad gave her the feathers to fly. Above the black circle of peaks, the two flew towards the last bit of orange haze. They chased the sun, whirling in the sky. They knew it remained enough to simply live in all the beautiful monstrosity to which they were born.

I crunched the snow walking back to my car under the sliver of moon hung in the night sky. The joy of flight still swelled in my soul. I wanted to stretch this moment out, but then it could never be a feather. Some moments you wish never ended, but then the next ones would never come.