As the end of the expedition neared, the thought of not having the river began to scare me. The Kali taught me so much. I wondered what I would miss.

But I didn’t think it would be any of these things that I would miss and remember. It would be the river: the sound of it going by every single morning. I woke up before the sun and its deep slow trill always reassured me that the water was moving on, and it was always moving. 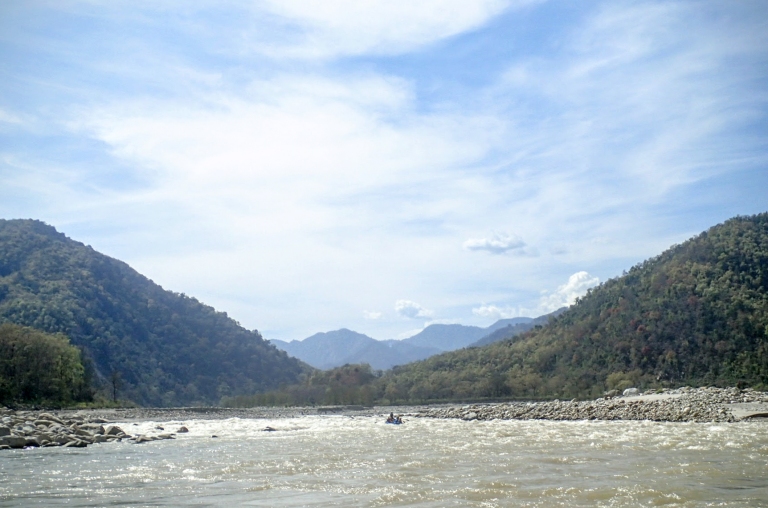 It never stopped, not for earthquakes or landslides or sunny days. Just like time, it kept on going by. That is what I learned from the river: the constant motion forward. To just let go and keep flowing through life just like the rivers do.

The sun danced through the hills and river, waltzing with the clouds. Over the river in Nepal, I watched kids splash in the water screaming joyfully as their brother drove the goats to water. There was such a joy in their voices, in the river. I think I forgot how innately the wish to play in water is ingrained in us. How much I love to twist and turn in the liquid embrace. There is nothing closer to absolute fun, a purity of joy remnant of childhood, a chasing of innocence

Somehow I grew up and forgot that simplicity. I grew scared of wild water, of water I couldn’t control. I lost trust, let it seep away from my soul with the ticking clock of reality. I lost that truth that runs deeper than time: that the ocean gave birth to me. I had wondered what I would take from this river. And then I knew. A love for it, a love for white water, a love for all it taught me in the few short weeks I spent on it.

On the river the only possibility is to let go. There is only one way, downstream. You must flow with it. You ride the glassy green snake with whatever comes. So I learned to just go with the flow and enjoy the ride, and most importantly to trust the river will only teach me the lessons I need to learn. And above all respect the river and learn from those lessons.

Those thoughts echoed through my head as in the middle of the last night on the Kali, me and a friend snuck down to the beach in the moonlight. The moon hid behind clouds casting a burnished silver light over the beach. Safe in the night from villagers, we dropped our clothes and waded into the river.

I stood there in the mud as small fish danced around my legs and the river rumbled by. Too cold to stay long, we were soon on the beach naked and alone staring into the cloudy sky. And then, there it was. The clouds parted. A corner of that silver dollop of the gods, teased us with its beauty. It refused the clouds imposed modesty as they attempted to drape over its majestically flesh. The wind wrapped around my body in a cold gentle embrace.

I felt like an off shoot of the earth, something so strong it could never be shaken. As solid as the rocks, as peaceful as the rivers, and as fiery as the sky. I felt utterly whole, completely in place in my corner of the universe. Attached to everything, but aware that I would never have a permanent place in this world. I suddenly did not need a thing except that fact that my feet dug into that sand on a beach in the middle of India.

I didn’t crave restaurants and beds or any other familiarity. They were all replaced by something more fulfilling like my shirt turned all shades of black and brown and yellow – the river days colored it -and my hands cracked into leather.

After being in India for a month, it was easy to forget I was traveling half a world away from home. But what is home but a mentality? It hit me differently each day. That night it hit me with wonder. Home felt eons away, and the new freedom from the things that so deeply defined me sent me flying.

I no longer noticed the trash and chaos in Uttarakhand. Instead, it was the handle bar mustaches, the wrinkled colorful faces, vibrant swatches of clothing, patchwork buildings, and sacred animals. It was no longer dirty or ugly or even different. It just was.

I was entranced by that land and falling head over heels with its people. There was no way to get over the boys paddling across the Kali, the bales of hay balanced on the women’s heads, the stoic figures standing on concrete roofs watching the green fields below, and the women in beautiful clothes shoveling concrete and building roads. Each of these people held a vibrant story under their life worn skin. The van filled with fast paced Indian music as we sped by towns, construction plants, their shanty towns, stray puppies, water buffalo, and power plants back towards our base.

The river still rumbled through my mind.