The hot Montana sun hits my face, as I roll a mango between my hands in a park. The mango softens under my hands and so does the past year. I roll back in memories to the first time I learned to eat a mango like this – rolling through the Himalaya’s with India bustling around me.

We woke up to the cold marble of a hotel on the outskirts of Pithoragarh. The town was full of rainbow colored houses that pancaked on top of each other. Streams covered in trash ran everywhere. A river that eventually ran into the Ganges was our destination as we loaded into the cars with two weeks of river rafting equipment. We sped away in the early morning light before traffic overtook the spider web of streets. Men hung out of their windows, toothbrushes sticking out of their mouths and street dogs scurried away from our tires.

We wound further north into Himalayas towards Nepal. For the whole two days it took to reach the Khali River, I pasted my face to the bus window. I grew up in the Colorado Rockies, but those mountains are different breed. The Rocky Mountains are a crippled old man compared to the colossal Himalayas.

The roads through these monoliths force many to down motion sickness pills and drool on their seats. I couldn’t sleep through a minute of this wild landscape. The sides of these mountains are more like grey knife edges than grassy slopes. We sped up and down them on roads barely big enough to fit two cows across. There are no signs or guardrails on these northern highways just the blaring horns of oncoming traffic and the steep mountain side.

Strung along the road like prayer flags, sit houses and storefronts either cut into the rock or perched below on the steeps.

Former man eater tigers caged outside of one town, a blood red military base, a blue crystal river, labors building roads by hand, piles of trash covering miles of road side, flocks of goats turning a ridge white – all these things flew past. I spent half my time praying one of these things wouldn’t be the last thing I saw as we crossed river after valley after river. The rest of the time my mouth gaped at the colorful blur of religion, culture and beauty that played across my window seat.

After climbing hours up those tiny roads, we finally began to drop into the river valley, and there was the Khali river: massive and ogre emerald  – home for the next two weeks.

The long hauls of gear down to the beach beat the stiffness out of our limbs from hours of driving. We dropped tubs of food and rafts carefully around the piles of human feces. The smell assaulted my nose, and throngs of people watched this odd gaggle inflate and pack rafts. We were too swept up in frantically saving our noses to notice much about the place. We exchanged the road for river and the mountains for valleys – just like that we pushed into the Khali with our turquoise blue boats. 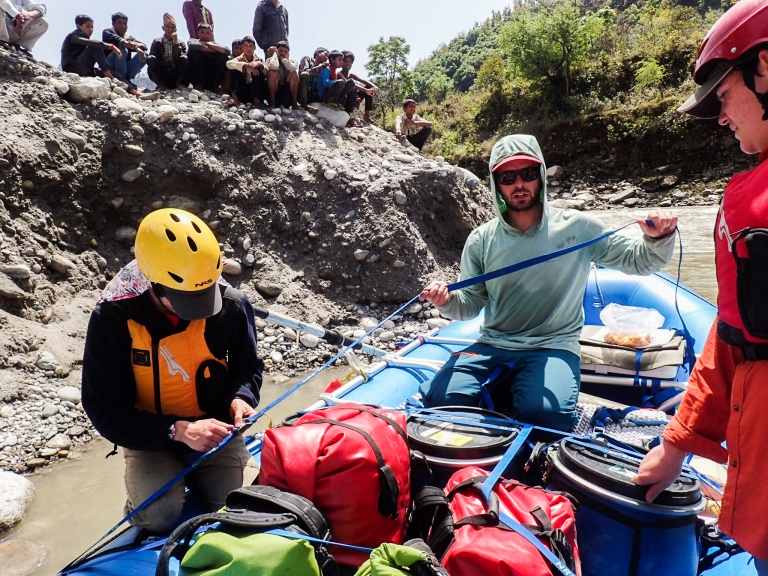 The peace hit immediately as we left the beach and towns people watching us. The forest slowly closed around as I dug my paddle into the glassy water.

That first night on the river the full moon hung in the sky. We played in the sand, kicking handstands towards the waterfall crashing in Nepal across the river. My arms burned from the paddling. I looked into the night sky, wondering what magic and lessons this river held for someone who barely knew how to wear a life jacket. A few military men wandered down to check our expedition out and villagers sat nearby as we ate dinner.

Even though we were not alone, the warm beach made it hard to remember that a mere 24 hours ago I spun around Pithoragarh’s market in a sea of color and noise fearing I would never emerge from its chaos. 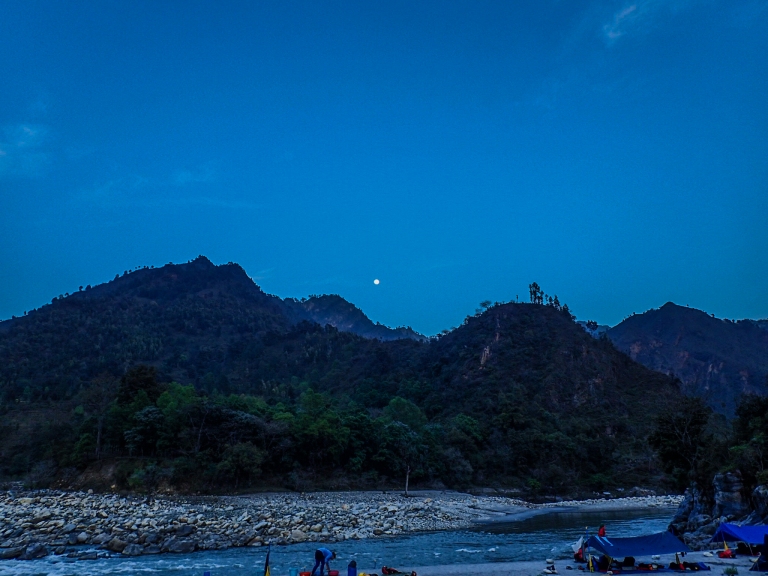 6 thoughts on “Up to the River – Pithoragarh to The Kali River, India”